How did your signature process of crocheting fiberglass begin?

Yvette Kaiser Smith: In 1992, first quarter of MFA school, I started making sculpture that dealt with abstracting narratives of identity, constantly trying new materials, never committing to one. Sheet metals, wood, wire, rawhide, beeswax. In 1994, for my MFA show, I used fiberglass matt, fiberglass insulation, and polyester resin to create a foot for a metal sculpture that was not working. Soon after, I began exploring fiberglass as material and process within my conceptual agenda. I purchased a spool of continuous fiberglass roving, but my trials were unsuccessful, and the spool got shoved under a table.

In late 1996, conceptually I was still focused on individual identity, still within the body, still discovering aspects of fiberglass as material and process. At Cub Foods one late night, about 1am, as I hurried past the meat counter, I saw tripe, and stopped in my tracks. My mind flooded with ideas. I saw tripe, I saw fat and lace at the same time, I saw beauty and ugliness in the same form, and immediately I saw a use for that spool of fiberglass roving. I associated lace with crocheting and bought a basic instruction book on how to crochet baby booties and potholders and assorted crochet hooks. A crocheted fiberglass exploration began then and kept me fully engaged until end of 2015.
. 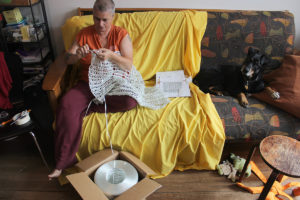 How did the math entered the work?

Yvette Kaiser Smith: In 1996, two years after completing my MFA in Sculpture, during an exploration into materials and processes that would support my conceptual agenda, I began developing my signature process of crocheting fiberglass. In 2001, I was looking for a way to break up a line of 80+ crocheted fiberglass discs by inserting spaces, in a seemingly random, asymmetrical, and unpredictable manner. My mathematician husband pointed me towards the number pi. I realized then that mathematical patterns are found in all manner of life and that numbers are in all aspects of identity as numbers label, classify, and define our place and identity within family, community, and the greater population. Mathematical structures became part of my conceptual toolbox. Since January 2007, all my work has been number generated.

Can you explain a way of visualizing numerical values in the crocheted fiberglass works.

Yvette Kaiser Smith: The crocheted fiberglass work lends itself to direct, easily readable, ways of visualizing numbers. One direct way to visually spell out a sequence of numbers is to literally count them out, creating a sort of surface pattern. Identity Sequence e 4 (121 x 117 x 8 inches), a grid of 17 rows and 19 columns, is constructed from 323 small units to straightforwardly represent the first 54 digits of the number e. Reading left to right and top to bottom, pale neutral tone units directly articulate each digit with fully saturated colors marking the space between them ( https://yvettekaisersmith.com/artwork/3143869-Identity-Sequence-e-4.html ) Another direct, more active sculptural method maps numerical relationships as spatial relationships where the value of digits determines the length of convex forms. One such group, pi Etude. . . 3238462643383, is a direct articulation of a sequence of 13 consecutive digits within the number pi. Each of the 13 individual units is 13” wide. The value of each digit determines a unit’s height and depth. ( https://yvettekaisersmith.com/artwork/3138470-Pi-Etude-3238462643383-Right-side-view.html )
. 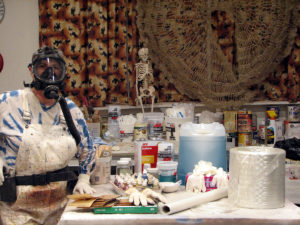 A more complex way to use number in the crocheted fiberglass work.

Yvette Kaiser Smith: My focus is not only on how to express digits visually in various materials and processes but also on what systems to use in specific circumstances. A State of Illinois Capital Development commission for University of Illinois at Urbana-Champaign necessitated that I incorporate a system I have not yet used with two often used expressions. The artwork needed to span 120 feet of wall-space in a corridor that houses ATLAS, Department of Applied Technologies for Learning in the Arts and Sciences. I was to create an artwork in crocheted fiberglass, based on a numerical sequence, and somehow incorporate a reference to computers. This is the one and only time that I incorporated a binary code. Lifesaver Movement in e is a group of 30 convex squares, each approximately 29 x 30 x 4 inches, based on the beginning sequence of the number e.

Squares were created using filet charting, a traditional crochet format based on patterns created on a grid, where squares are either filled or left open to create an image. All computer language is based in binary code, a code of either 0 or 1 for a computer to toggle between. The code in a computer language is based in strings. Each binary string has eight binary bits that look like a bunch of 0s and 1s in a certain pattern unique for each letter of the alphabet. It seemed fitting to combine these two on/off systems where 0 = off = open square and 1 = on = filled square. Using a free online text to binary translator, I translated digits in text (the words: zero, one, two, three, four, five, six, seven, eight, nine) to binary strings. The pattern within each square spells out a single digit. The 30 squares represent the first 30 digits of e.
.

Following the sequence, the 31st through 36th digits of e, 266249, determine how the line of 30 squares breaks into smaller groups. The first 2 squares are hung higher, the next 6 are hung lower, the next 6 higher, and so on. Referencing 30 more digits of e, in sequence, I use a different method to determine color placement. Each of the five colors had a specific designation. White was color 1, red color 2, and so on. As example, the next 4 digits in the e sequence are 7757. When working out the color pattern in preliminary drawings, I counted 7 spaces and placed white, then 7 more spaces and placed red, then 5 spaces to place color 3. I kept running the sequence left to right until all 30 blocks had a color designation.