Robert Lardus, like many others, looks for the nature of art in symbolism and the nature of symbolism in the general theory of iconic signs. The artist adheres to the principle that the relationship between signs and the world can be described like any relationship. He accomplishes this by means of formal structures, a unique dictionary of signs. He took a man as a subject, and scripture as a medium. By drawing simplified human figures, he gives them the meaning of signs, the meaning of letters from a new abstract alphabet. He creates a very private, own dictionary. He practices symbolism in art very freely and effortlessly.
. 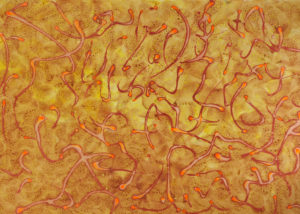 The signs painted on the canvas are labels that he assigns to unknown meanings. He repeats this technique on every canvas using symbolic figures. Robert assumes exactly the justification that the signs provide in their form. And they can be interpreted in any way.
. 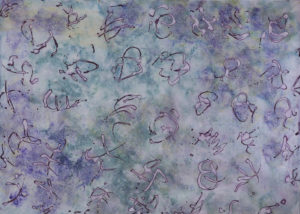 Applying this form of symbolism in art, he cultivates an original variety of post-figurative painting. As a result, abstract and surreal elements are included in the paintings. He creates fanciful works filled with human-symbolic motifs. The paintings are full of expression and symbolic poetry. He says about his work: “My paintings are emotional metaphors. Their task is to convey to viewers the experience of an emotional drama that I try to show with the help of spontaneous ‘humanographic’ symbolism in art”
. 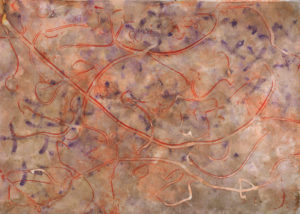 His paintings look like Egyptian stone tablets, Scandinavian carvings or inscriptions carved on Roman temples. They are rhythmic, they are orderly, they transmit a symbolic message. Symbolism in art presented in this way is a new approach to recording emotions, experiences and messages. It is encrypted. Everyone can decode it on their own and in their own way. The artist doesn’t impose anything on us. Even the names of the paintings do not suggest their content.