MyInterview for Icelandic newspapers in January 2020. That was following the opening of the group exhibition “SAMSLATTUR” :

Jelena Antić is from Serbia but moved to Iceland four years ago. She has slowly been making a name for herself in the visual arts world in Iceland and is participating in the group exhibition “SAMSLATTUR” which will be opened today.

THE “SAMSLATTUR” is a show of nine different artists who are working in same studio building in Auðbrekka in Kopavogur. The exhibition is at Korpúlfsstadir Loft and opens at 14.00 today. In the description of the show, says that this exhibition is an ode to the darkness of January. Jelena says that in her works what appears primarily are the bright colors and clean brushes. “Bright colors and pure paint are something that is always present in my work. I’m really sick of dirty brushes and dirty water. That’s why I paint with many brushes and often change water when I work.”

Jelena has held two solo exhibitions in Iceland and participated in the Art Fair “TORG” in 2018 and 2019. In addition, she has exhibited her work in Serbia, New York and Los Angeles. This is the first time she has participated in a group exhibition in Iceland organized by the artists themselves. “I think it’s very important to be able to work with other artists. I love the atmosphere in our studio and I enjoy it when some of us have the door open. The atmosphere reminds me of when I was in school. Something I longed for in my first years here in Iceland. I would like to spend more time in the studio, but I also want to spend time with the family so I can’t be in the art world at all times. The Internet and social media are a big help there. There I can connect with other artists and watch what they are doing and show them my work.

Nice to participate in an exhibition with people from different directions
The group at the show comes from different directions, so their art is diverse. Jelena says she enjoys participating in an exhibition with such a diverse group. “I feel respected within the group because of my art and I also admire the others in the group for what they have done,” she says.
Jelena did not find it difficult to enter the art world in Iceland at all. “I think it’s more difficult in other countries, but maybe I’ve just been so successful in adapting here. I lived in Athens for almost six years and did nothing to get ahead in the art world there. I blame the lack of opportunities for it, but maybe I just wasn’t trying good. But as soon as I moved here, I knew what to do and how to get started. Everything else just followed, step by step. ”

Jelena says she doesn’t find much difference in Icelandic art and Serbian, but she finds more opportunities in Iceland and she enjoys more recognition. “I feel connected to the outside world here. But there are probably more art critics and art historians writing about art in Serbia. ”
Next on the agenda at Jelena are two solo exhibitions. The first one will be in March and will be in the SÍM hall in Hafnarstræti and the second one will be at the Hlöðaloft in Korpúlfsstaðir in May. “The exhibition at SÍM is called Metaphysics, but the name could change. There I will show how I see the theoretical physics. In my mind, theoretical physics is a very abstract phenomenon that is hard to imagine. As a result, people may have very different ideas of how it looks, but I will try to show my idea. ” 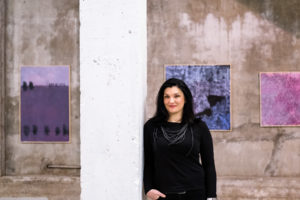