O-A: Who or what inspired you artistically; a person, artist, event, experience

David Carr: In the mid 70s I was flying to Los Angeles with my family, I must have been seven or eight years old at the time. As my father was a pilot for British Airways, we got upgraded to first class and I ended up sitting next to a man with striking blonde hair and unusual glasses. During the flight I occupied myself by colouring in a book of pictures featuring cowboys and indians. As I was colouring a portrait of an indian chief, the man sitting next to me began to explain how light changes the colours on each part of the face and kindly showed me how to make my figures look more three dimensional. I had no idea who this man was, but a few months later I saw him on television. It was David Hockney. I became fascinated by him and his art, through him I discovered other Royal Academy artists like Peter Blake, Tom Phillips, and RB Kitaj. Like any young artist I copied their works, ideas and styles as I learned how to use various media and experimented with ideas of my own.

O-A: How has your art changed over time? Why?

David Carr: I began, as most artists do, copying pictures I liked in order to try out various different styles. These ranged from the modern art of Picasso, David Hockney and Van Gogh to the landscapes of Constable and Turner. I first began using acrylic paint, but changed to oils when I discovered the longer drying time served me better. I was awarded an art scholarship to a top public school in the north of England, and was selling landscapes and taking on commissions by the time I was fifteen, but these landscapes, and a couple of portraits, never really satisfied my personal expression. I began to experiment with abstract and expressionist works. I remember my first visit to a major exhibition in London that opened my eyes to the freedom of expression that art could offer. The show was held at the Royal Academy of Arts in London and was called “German Art in the 20th Century: Painting and Sculpture 1905-1985”. This exhibition truly inspired me to break free of academic, traditional styles and experiment with my own ideas. I knew I was doing the right thing as most of the paintings I created in my 20s were neither understood nor liked by my parents; always a good sign of development I believe. My latest works, that span the past five years, have taken years of trial and experiment to evolve, and for the first time in my life I am pleased with the finished works. I have always been very self critical and have thrown away hundreds of my paintings over the years.
–

David Carr: Art, to me, is an essential part of my existence. I have created works of art throughout my entire life and each one has its place in my development as a serious artist. Even while I was working in the music/broadcasting business I found time to paint. I find peace in my work, especially now. I don’t think my paintings are about me, but they come from within me, they take me to a place that nothing else can. I loose hours of my life while painting, the time just goes. I find myself crippled with aches and pains at the end of a day when I have painted for eight or nine hours with barely a break. I become obsessive. I can’t paint in silence though. I always have music on which, sometimes adds to the inspiration or creation of a piece. My life has been shrouded in art and music and on several occasions my paintings have been described by critics, or other artists, as being “musical”. I can not see this myself, I don’t feel that that is my role. I create something that comes from within me, and I leave interpretation and critique to others. I love the fact that different people can find different things in my work. Like staring at a cloud, someone may see a face, a shape or figure emerge from the sky, yet the person standing next to them may see something different, or nothing at all. This is what I love about Art: The freedom to make of it what you will.

O-A: How do you search for inspiration and themes for your work?

David Carr: I have never had any problem finding inspiration for my work. I see potential paintings wherever I go and often pop ideas down quickly into my sketch books as, and when, they occur. I have been inspired by many things in the past. Some of my paintings are rooted in an event, an emotion, even a word or some random sentence I have overheard. Inspiration can come from anywhere. I do, however, spend a lot of time thinking, or even dreaming, about colours. Quite often I will be planning a piece, I will know the inspiration and will feel the shapes and patterns I want to include but the colours are always the most difficult. I will look at my other pieces but more often that not I will wake during the night and they will have come to me subconsciously. This is how I came up with my “Celebrity Colour Challenge” for 2020. I wanted to push myself further in experimenting with colour by restricting my pallet and, in order to do this, I needed the decision to be taken out of my hands. I chose the word “Celebrity” carefully as I wanted it to attract the eye of the public, but also encompass both well known people from the world of entertainment, but also people I personally “celebrate”, to bring them to the attention of a wider audience. I have approached artists, musicians, and actors that I personally admire, some of whom are less well known than others, and let them make a choice of just three colours from my studio. I can then, with just the addition of black and white, create a work of art. The work is not directly about the celebrity, nor is it created for them, but hopefully, by them choosing the colours and me knowing them, or of them, something unique will subconsciously make its way into my creations.
– 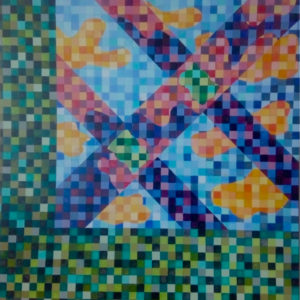 O-A: What do you usually talk about with your collectors?

David Carr: I have been very lucky to meet some of the people who have bought my work. Usually my paintings are bought via the internet and, like children that have grown into adults, I simply let them go out into the World and do their own thing. I have never kept any information about where they have gone, and have no idea where they will end up. Several of my works were bought by people living in the USA and Germany. The collectors that I have met have all been interesting. I have sold to serious art collectors and also to people who just happen to have seen, and fallen in love, with one of my pieces. I rarely talk about the piece with the buyer as I prefer them to discover their own connection with it. I usually talk about my interest in the history and development of art and some of the artists that have influenced me over the years. I studied the history of European art and architecture as one of my A levels, and have never stopped being fascinated by art history. I do get asked about my paintings, sometimes about some small detail or colour I have used. Usually, when pushed for a response, I will answer with the truth; “I don’t know, It just happened..i guess that is what makes me an artist.”

O-A: What names do you give your artworks?

David Carr: Putting a name to one of my pieces can be difficult. Some of my paintings have names before I even start them, the name being the inspiration for the piece. Others are named after completion, a mental process that can take days for me to conclude. Usually it will be during the drying time of the finished work that I will keep looking at it, running ideas around in my head until some word or words seem to fit. I am not one of those artists that can number or name my work in a “deep and meaningful” way. I name my paintings with titles that I feel enhance them as completed, unique works. They are like my children, individual but containing elements of me, and I want them to have names that suit them. There are no hidden messages or meanings in their names; at least, I don’t think there are.
–