O-A: What is art to you? Is creating an urge, necessity or something else for you?

Barbara Kemp Cowlin: Art is an integral part of my life. From the time I was a young child I’d be overtaken with the need to create something from nothing. Sometimes I had a clear picture of what I wanted to make, other times it was a vague feeling with an urgent need to make something that didn’t exist before. During this time of my life, if I couldn’t figure something out, such as what kind of materials to use—or worse if the materials I wanted weren’t readily available, I’d throw a tantrum. I know my mother dreaded these. To her credit she did everything she could to keep me in supplies and tried to help when possible.

This compulsion to create has been with me for my whole life, although I didn’t label what I was doing as being an artist until I became an art major in college. Now I enjoy the challenges of not knowing quite where I’m going with an idea and the trust in myself that I’ll be able to figure it out with lots of trial and error. This process is magical to me.
.

O-A: What would you do without art? What did you discover, achieve with it?

Barbara Kemp Cowlin: It’s hard for me to imagine my life if I wasn’t an artist. On the other hand, I’ve sometimes wished that I’d chosen an easier, more secure and more lucrative path in life. When I look back, the main ways I’ve made a living (teaching art, graphic design, arts administration) have enriched my life and added to my overall knowledge of art and the art world. I discovered that I’m a good art teacher and to my surprise, I’m very patient with my students. I’ve taught every grade level from first grade through university. Each age has its’ own challenges and rewards and I enjoyed teaching them all. Working as a graphic designer ingrained a sense of design into my work. Arts administration gave me a glimpse of some of the inner workings of the art world which has given me helpful insights when working with art curators, galleries and other art professionals.

O-A: What inspired you artistically; a person, artist event, experience

Barbara Kemp Cowlin: When I was in high school my family made a trip to the World’s Fair in New York City. A replica of Michelangelo’s sculpture, David, was on display. What I remember from then was the moving sidewalk viewers got on as it glided by the sculpture. I was so stunned by the warmth coming from the marble and the way in which the gesture in the figure made it look like he would move at any moment. I recall being frustrated at not being able to stand still in front of the sculpture. While the rest of my family moved on, I stayed there and got on that sidewalk again and again to try to absorb every detail of what I was seeing.

As an adult, also on a trip to New York City, I stumbled on a show of the work of Howard Hodgkin at the Metropolitan Museum of Art. I had never heard of him before but was so drawn to his beautiful paintings that straddle the path between abstraction and representation as well as the fact that he was an outstanding colorist.
.

O-A: What is a vivid memory of a remark concerning your art that stuck with you?

Barbara Kemp Cowlin: The remark that most sticks with me about my art was made by James Ballinger, former Curator of Contemporary Art and Director of the Phoenix Art Museum, when attending an opening of one of my solo shows last year. He told me that something about my work reminded him of Richard Diebenkorn’s paintings. Since Diebenkorn is one of the artists I most admire, I was very excited to hear this coming from such a knowledgeable and respected person in the art world.
. 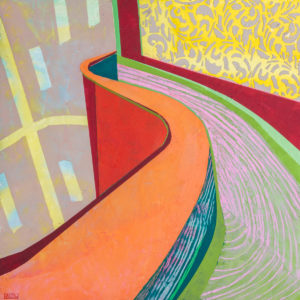 O-A: How has your art changed over time? Why?

Barbara Kemp Cowlin: I started out as a printmaker. The prints were narrative figurative works based on life experiences that I turned into visual stories. After I graduated with a BFA and MA in Community College Education with a major in printmaking, it became apparent that without access to university studios and equipment, I needed to find a different medium to use. It was heartbreaking at the time.

I began painting in oils. This work was also figurative and narrative, based on family scenes, but realistic.

I married a landscape photographer around this time and many of our travels involved his photography. I became interested in the landscape and my work changed to predominately landscape painting. I switched to acrylics when I had young children and my studio was in our home. I found a new freedom working with acrylic paints and mediums.

After years of being immersed in landscape painting, I was visiting the Phoenix Art Museum one day and began to notice interesting architectural details. I was attracted to the hard edges, luminous color and light against solid surfaces. I began painting realistic details of the architecture in a series I call “Nooks and Crannies”. I focused on this series for about five years.

Then, during our travels I became captivated by water, the way in which it moved, reflected light and changed color. The new “Painting Water” series became my main focus for several years, with the occasional “Nooks and Crannies” sneaking in.

About three years ago I decided to do some experimentation both for fun and to get me out of my comfort zone. I purchased a dozen 10”x10” wood panels. One day we were driving around and I noticed an interesting Southwestern style home in Tucson that was painted in bright colors and incorporated pattern and texture in its’ design. I took some snapshots of details and began to experiment on the small panels.

The result is my current “Askew” painting series. The difference with this series is while I start with a basic framework from the photographs, that is just a jumping off point. I re-imagine and skew the angles and add colors, fanciful patterns and other details to these paintings. They are quite different from the “Nooks and Crannies” series in their departure from realism.

O-A: What names do you give your artworks?

Barbara Kemp Cowlin: Up until my most recent series, names for the paintings would often come to me while I was working on them. The landscape paintings are usually named with the location included.

The “Nooks and Crannies” series have more inventive names such as “Stairway to an Indeterminate Destination”.

The “Painting Water” series are a combination of location and invention as in “Calligraphy on Pena Blanca Lake”.

The “Askew” paintings started as an experiment. I began by giving them numbers instead of names because I didn’t realize how many of these paintings I’d eventually create. Now that I’m at “Askew #94” I wish I’d stuck with naming each painting rather than numbering since I’ve found it really confusing to keep track of which painting is which number. After “Askew #100” is finished, I plan to start naming the new paintings.
.