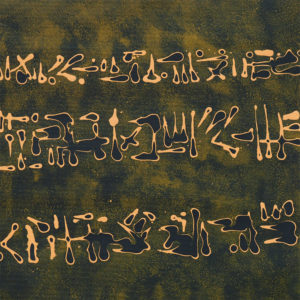 As an abstract artist, he describes the conceptual process with his work. Through his work, the painter refers to his art metaphorically. He describes the world with pictorial symbolism, using terms such as language, vocabulary, conversation and narration. Lardus made his own alphabet from quasi human figures. An alphabet with an infinite number of signs. In his painting symbolism, he uses figures-signs in different ways and with different meanings. For example, he refers to “languages” which are made up of systems of depicted objects, in this case humans. The artist writes his story in a language consisting of sets of quasi-human shapes.
. 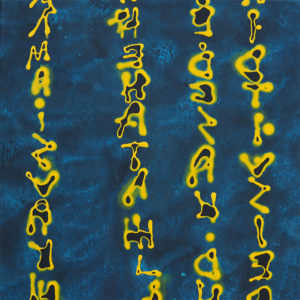 This way he conducts a “conversation” with the recipients of his works. Overall, Lardus uses metaphorical characters. He describes the subject he is interested in and analyzes the impact of a work of art on potential viewers. In his painting symbolism he uses colors, shapes and his own artistic process, thus coding his thoughts on interpersonal relations.
One spot of color in an image affects the spot next to it just as people interact with each other. Lardus is an artist who combines representation and abstraction in the same work of art. He uses metaphors. Inverts the meanings. He doesn’t write about people, but writes in characters-people. His every painting is a story. Color and form symbolically convey relationships. The signs overlap and merge into larger forms. They compete with each other for the space on which they are placed. They create patterns known to us from geometry, or random mixtures. They become similar in shape, color, and at other times are contrasted. The painting symbolism used by the artist is an unlimited catalog. Both in terms of what can be described with it and what can be read by it.
. 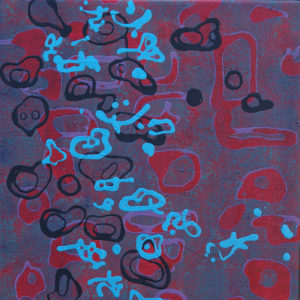