You are an abstract painter. This is your credo. Is DYSMORPHOPHOBIA, the series of your works a series of images-illusions?

Robert Lardus: As an abstract painter I use various tools, for example Optical art, Op-art, which is a kind of abstract art. And I do it for a purpose: I want to have an impact on what the recipient of my canvases sees. I use optical illusions and lighting effects. I use a unique painting technique. Thanks to my painting method, when viewed closely, the painting evokes the impression of depth and vibrating movement. It transforms in front of the viewer. And I invite the viewer to come over, to enter into what I am conveying. 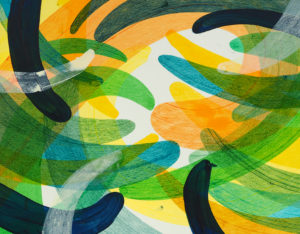 So it is an intended plan, for which you use the appropriate artistic means, right? Such a kind of trap for the recipient?

Robert Lardus: I’d rather put it differently, although yes, it is an attempt to draw in the observer, get him for the message, yes. Optical illusions make it possible to change the emotional perception of perceived images. The influence on the intellect and emotions of viewers is very important to me. Images in the minds of viewers change and adapt to ideas, associations and memories. I’ll develop it in a moment. In any case, the viewer creates his own version of the picture. It can even be said that he is a bit of an abstract painter himself.
. 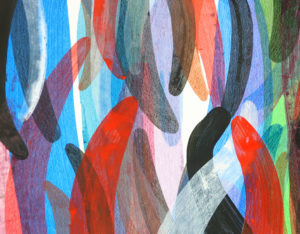 An immersive, engaging approach to painting.

Robert Lardus: I draw the viewer in a game of illusions. I make the image spatial. In this way, I change the perspective of looking, I change the viewers’ awareness while watching the image. There is no straight line in nature, there is no order. The disorientation and surprise of the human eye triggers unknown areas of our subconsciousness. Hence the name of the series. Metamorphopsia.
. 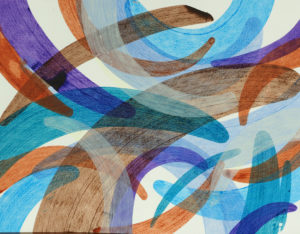 Metamorphopsia. Disturbance of visual perception. As an abstract painter, do you study scientific phenomena and the psychology of optical perception?

Robert Lardus: Well, I am just asking myself: do we all see the same way? Is our perception changing? Can we feel images differently? Metamorphopsia occurs due to a disorder of the central nervous system that is involved in the transmission, modality and analysis of visual stimuli. Objects seen are perceived as altered, but in such a way that the object is still recognizable. The image seems to have properties different from the real ones.
. 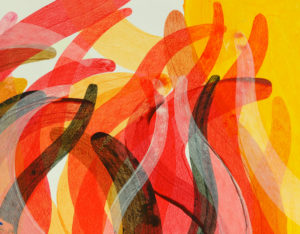 I understand that this is the starting point. What’s next, how do you transfer this to your canvas?

Robert Lardus: Our brain, our nervous system can perceive the environment differently as a result of the stimuli provided. The viewed image is real, its associations are caused by presumptions and conjectures. The viewer’s brain looks for associations, assesses the drawing, colors and tones. An abstract image in your mind changes and adjusts to the image, association and memories. And each viewer deforms what he sees in front of him into his own image, creates his own metamorphopsia in his mind.

It is a kind of inspiration for viewers.
. 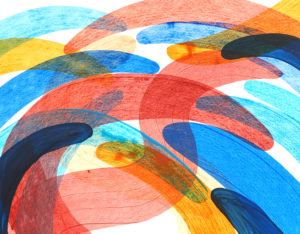 Robert Lardus: An abstract painter does not show the real world. I am interested in the emotional side of the phenomenon of viewing. The pictures I paint go beyond simple deformation. They are a puzzle in which you have to find and imagine the topic. An abstract painter has, in my opinion, broader possibilities than a realist. In a realistic picture, the viewer becomes fixated on what he sees. A horse is a horse. The sun is the sun. The associations are unambiguous. An abstract painter wants his paintings to develop the imagination of viewers. He wants to move them emotionally.